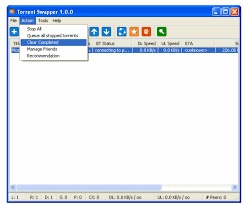 Torrent Swapper mashes a perfectly reasonable torrent client with the idea of a burgeoning community.

Many Web-based communities have been successful at creating torrenting networks, but there hasn’t been one that’s been tied to the torrent client itself until Torrent Swapper. The Torrent Swapper community is a well-designed recommendation system that lets you rate torrents and grab the torrent file itself from your “Friends.”

Once you’ve opened a torrent, you can access the two community functions. The white star toolbar icon gives you access to Recommendations and Download History. Recommended torrents show a rating, the number of sources sharing them, the number of files in the torrent, and the torrent’s tracker location. You can set the list to only show torrents with a recommendation above a minimum threshold, helping you avoid bad torrents. From within your Download History, you can rate the torrents you’ve downloaded.

The Manage Friends/Encountered Peers icon lets you add, edit, and remove Friends, while the Encountered Peers list keeps track of everybody who has opened any of the same torrent files that you’ve opened. This makes it easier to add and find friends, ostensibly with similar sharing habits as you.

Given the basis for Torrent Swapper’s community, it’s impossible to mask your IP address as you can in other torrent clients. Swapper also feels a bit clunky, and frequently lags when starting downloads. But if you’d like more direct feedback, or if you miss the immediacy of communicating like you can in LimeWire and Kazaa, you might want to swap in Torrent Swapper.

Torrent Swapper is an open sourced sociable peer to peer file-sharing client based on the Bittorrent protocol that is ideal for high-speed distribution of large files that has a basic understanding of human friendships, of user tastes in content, and of Internet connectivity between users. Torrent Swapper supports simultaneous downloads, download queue, selected downloads in torrent package, fast-resume, disk cache, speed limits, port mapping, proxy, and ip-filter.