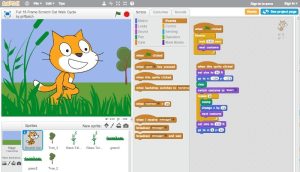 Of late, some of the best technology to come out of MIT’s celebrated Media Lab has been built with whippersnappers in mind. The birthplace of the $100 laptop has also issued forth Scratch, a colorful, simplified app that quietly teaches budding young developers the logic of a programming language through animating a character, or “sprite.”

The program consists of a four-panel window clearly organizing an elements library, scripting arena, staging area, and preview window. The elements for motion, sounds, and senses are the objects, actions, rules, and conditions of a programming language. Snap them together in the scripting area to make a sprite walk, speak, play music, or interact with other sprites. We applaud that the controls are intuitive enough for kids to begin with simple maneuvers while complex enough to build elaborate games and scripts that make use of various effects to share with family and other Scratch users.