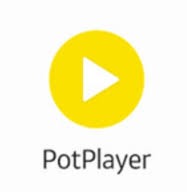 Daum Potplayer: It’s probably not what you’re thinking, whatever that is. It is, in fact, a free video player. We hear you say, “There are so many free video players; what sets this one apart?” Its built-in codecs handle most video formats, and you don’t have to install them yourself. It has several levels of controls and settings, making the most useful commands easily accessible. It’s attractive but also skinnable and customizable. It supports a variety of video devices, including capture devices like cameras, DVD and digital recorders, and both analog and digital TV, including channels.

Potplayer opened with its Playlist window displayed, but we could toggle it open and closed from the interface. This player has a full suite of familiar controls and counters on its interface, including full screen, repeat, shuffle, and volume, but you can also access filter and rendering settings, speaker options, and other settings from the main window. Right-clicking the interface or the program’s system tray icon accesses an extensive main menu.

Under Options, we could set housekeeping and behavioral features such as On Top, Prevent Screen Saver, and shut-down at specified times. Clicking Control Panel opened a small, rectangular, tabbed box giving quick access to Audio, Colors, Caption, and Playback settings. The Audio settings include the optional equalizer, which itself offers an extensive menu of preset audio schemes. Likewise the color sliders made quick adjustments a snap. Things got even more detailed when we opened the Preferences sheet, which includes device configuration, network settings, and other advanced options.

When we opened and played a familiar video, we were surprised to see a distorted aspect ratio, which expanded and contracted as we dragged the window. The default aspect ratio setting seems to be Free, not Fit to Video, which is actually the program’s recommendation. However, we quickly changed the settings, which restored our movie’s proper presentation. The Playlist is part of the interface, not a separate window that can be placed separately, though that’s a minor matter of preference. We certainly have no complaints about the Playlist’s editing options. Daum Potplayer proved one of the more versatile freeware players we’ve tried.