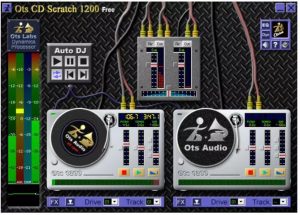 Ots CD Scratch 1200 is a fun and easy-to-use program that lets users play CDs in a virtual turntable environment. It’s not as complex as some of the DJ software that we’ve seen, which may be a drawback for more advanced users, but this program is a great choice for those just getting started with turntable-style DJing.

The program’s interface isn’t the most intuitive we’ve ever seen, but it gets points for being fun. The design seeks to replicate the appearance of a real DJ deck, with two turntables and various cables and buttons. We do wish that some of the buttons had mouse-over tooltips, but on the whole the program was pretty easy to figure out after a bit of experimentation. Ots CD Scratch 1200 has several really cool features, including the option to play two tracks from the same CD at once. The program can even play one or both of the tracks backward, and they can be sped up or slowed down with a simple slider. The application’s PDF Help file is well-written and thorough. If we have any complaint about the program it’s that it is a CD player and only that; it does not allow users to play MP3s or other digital audio formats. The program does support the use of multiple CD players, though, so it’s a great choice if you want to spin songs that are still stored on CDs.

Ots CD Scratch 1200 is free, but the paid Deluxe version has additional features. The program installs a desktop icon without asking but uninstalls cleanly. We recommend this program to all users.

CD Scratch is a virtual turntable CD player. Play two songs from the same CD at the same time–one forward and one in reverse. Scratch a CD track back and forth like a record, or listen to your favorite CD automatically mixed between the turntables. The new version contains enhanced architecture.