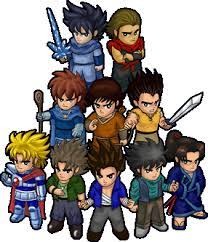 For fast play in a Street Fighter-style environment, Little Fighter seems to have punched and kicked its way to the top. Fitting in with its retro feel, you play a small character with a big head–reminiscent of the Japanese “chibi” designs–and fight against the computer or a friend, one-on-one or in a melee.

The control keys are simple and customizable to your preferences, but it’s not a hard game to learn. You can move up, down, left and right; you can attack, defend and jump. That’s it. No more, no less, and yet some users claim that Little Fighter can suck them in for hours at time. You also can have up to four people playing off the same keyboard simultaneously–a charmingly quaint touch.

The English translation of the game leaves more than a little to be desired, so it will take some messing around to understand how it works. We found the Web site to be unhelpful, but reprogramming the keys to ones we were comfortable with made everything easier. The game is also slow to load at times, but we can see how Little Fighter can get addictive in a big way.

Little Fighter 2 (LF2) is a popular freeware fighting game for Windows. LF2 was created by Marti Wong and Starsky Wong. Its popularity has been substantial thanks to its simple yet addictive gameplay, its great replay ability and free at the point of use availability. The game can have up to 4 human players on one computer and 8 characters in network play at one time. Game modes include VS mode, Stage mode (where 1 or more players move through the environment killing increasing numbers and difficulties of enemies), Championship mode and Battle mode (involving mass armies led by a player).