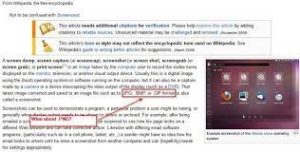 When choosing a free screenshot tool, consider why you’re saving screenshots and what you need to do to them. It must quickly and easily capture all or part of your screen. You should be able to obscure, blur, annotate, or highlight parts of the image as you create it. Finally, you should be able to save or export your screenshot just as effortlessly as you created it, including uploading it directly to sites such as Picasa using plug-ins. That describes our new favorite screenshot tool, GreenShot. Recent updates include Windows 8 compatibility.

GreenShot’s installation wizard lets you choose from a variety of plug-ins to install, as well as huge list of interface languages, most displayed in their own form of script. The installer apparently detected our copy of Office because the Office plug-in was already selected. We could also set GreenShot to open when Windows starts. When it’s running, GreenShot sticks to the system tray until you need it. Then you can either click its icon to open an extensive (and nicely rendered) menu, or use a variety of hotkeys for specific jobs. GreenShot’s Settings are much more extensive and impressive than most free screenshot tools. For example, the Destination tab let us choose either to select file destinations dynamically (the default setting) or to designate specific choices ranging from Save directly to opening an image editor or Office app. There’s also an Expert tab with a checkbox labeled “I know what I am doing!” that enables options such as checking for unstable updates and specifying printer footer patterns. The system tray menu also has a Quick Preferences submenu for common settings.

GreenShot works a lot like other screen capture tools. We selected Capture region, held down the mouse button and dragged the active area to capture a screen image. GreenShot’s green-tinted capture region is pretty cool and makes selections a cinch. We opened our new image directly in the surprisingly sophisticated GreenShot Image Editor, which let us add effects, text and objects; resize, crop and rotate; and even draw freehand on our image. GreenShot is our new choice for screenshots.

Greenshot is a light-weight screenshot software tool for Windows with the following key features: quickly create screenshots of a selected region, window or fullscreen; you can even capture complete (scrolling) web pages from Internet Explorer. Easily annotate, highlight or obfuscate parts of the screenshot. Export the screenshot in various ways: save to file, send to printer, copy to clipboard, attach to e-mail, send Office programs or upload to photo sites like Flickr or Picasa, and others and a lot more options simplyfying creation of and work with screenshots every day. Being easy to understand and configurable, Greenshot is an efficient tool for project managers, software developers, technical writers, testers and anyone else creating screenshots.