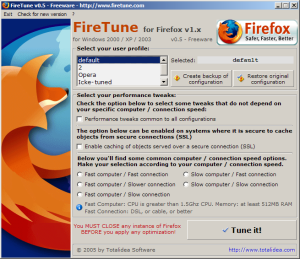 FireTune for Firefox optimizes Firefox’s performance on your computer by allowing you to configure its speed and connection settings. However, we found little or no difference in our computer’s performance after we put it to the test.

Right off the bat, we noticed that some of the features this add-on includes, such as the autocompletion of URLs, are features that Firefox already has built into in its current version. It does, however, allow you to set up other optimization features, such as the caching of objects shared over a secure connection, autocomplete for URLs, and optimization of memory usage. The application allows users to “tune” their Firefox by choosing from a list that includes information about how fast your computer and connection is. We tried “Fast Computer, Slower Connection,” because we are using a new laptop with a DSL connection. We didn’t notice any obvious changes in the performance of Firefox on our computer when we used this program, versus usage of Firefox without it. This add-on might be useful to users with slower computers and connections.

FireTune installs and uninstalls easily on your computer. And since it’s free, there’s no harm in giving the program a try, especially if you are experiencing performance problems with Firefox, connection problems, or if you are using an older or slower computer

FireTune for Mozilla Firefox was developed for an optimization of your browsing experience with Firefox. It is based on a collection of popular and well working optimization settings used and tested by the experts. Usually you have to optimize Firefox manually, which can be time consuming and difficult for the novice user. FireTune helps you here–it includes all the performance optimizations.