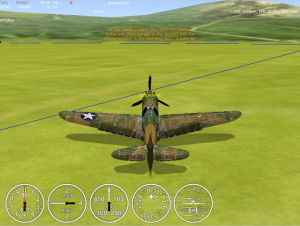 Welcome to the world of Fighter Ace, a 3D massively multiplayer aerial combat game celebrating its 10th Anniversary Year with a new release now featuring Jets. Strap yourself into the cockpit of any one of over 100 World War II and Korean War vintage fighters and bombers before taking to the skies against hundreds of other virtual pilots. Watch your six as you join in the most notorious battles in history as an Ally or an Axis Power. Fly for Germany, Japan, Great Britain, Russia, or the United States in detailed and accurate terrains including Guadalcanal, Midway, The Battle of Britain, Kursk, and Korea.

Any way you fly it, Fighter Ace is an exhilarating, real-time experience every time you play. Offline play offers eleven training missions, five practice arenas, and three arenas with different flight physics levels. Strap yourself in and get ready for some white-knuckled air-combat.