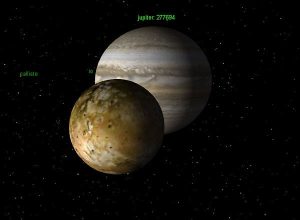 This tour of our galaxy begins at Earth, then recenters and zooms in on the Moon. After that, Distant Suns – Grand Tour 3D Screensaver heads out toward the far reaches of the solar system. Text in the upper left of the screen shares information such as the name of each object, its diameter, and its orbital period. However, you can disable this information if you so choose. The closer planets and many of the moons are gorgeous. For example, Saturn’s Ganymede looks like a scarred garnet. On less-studied objects, such as the satellites of Uranus, only the part that has been photographed has detail. While most appropriate for astronomy or sci-fi buffs, we could easily see this program gaining a larger audience, especially since it comes free of charge.

Distant Suns – Grand Tour 3D Screensaver is a high-speed, full-motion, solar-system simulator using OpenGL technology and accelerated graphics. The positions and rotations of each of the planets and its moons are accurate to the current date and time (making the program a clock of sorts). As the day progresses, you can observe the great red spot of Jupiter as it wheels across the face of the giant planet. Watch the moons of Saturn in their daily dance around the majestic ringed world, and watch Earth rotate under your feet. The constantly changing scenes assure an infinite variety of interplanetary vistas. Grand Tour 3D now comes with Phobos and Deimos, the moons of Mars, and features the Mars Rover landing sites. Version 1.22 build 1 may include unspecified updates, enhancements, or bug fixes.